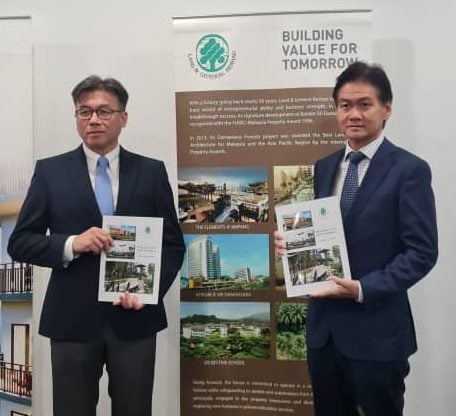 Kuala Lumpur, September 2020: Following its 57th Annual General Meeting (“AGM”) today, Land & General Berhad (“L&G” or the “Company”) announced its results for its financial year ended 31 March 2020, which reported a marginal improvement in its revenue but a reduction in pre-tax profits.

The group’s revenue of RM139.7 million for its financial year ended 31 March 2020 (“FY2020”) was marginally higher compared to RM134.4 million for the corresponding financial year ended 31 March 2019 (“FY2019”).
Revenue was principally derived from the property division, led by the 3 on-going development projects which are Astoria Ampang, Sena Parc Senawang and Damansara Seresta. Sales and construction progress at all three (3) projects during the financial year led to the higher revenues in FY2020 compared to FY2019.
The group’s pre-tax profit was RM26.2 million for FY2020, down from RM52.9 million a year ago, primarily due to its other income being reduced by half in FY2020 because of a significantly lower writeback of provision relating to liquidation of a former subsidiary as compared to a year ago.

As Board of Directors took the view that the Group should conserve its cash resources to cushion any potential adverse economic impact from the Covid-19 pandemic, the L&G Group did not propose any dividend for FY2020.
During FY2020, the Group concentrated on developing and selling its on-going projects, which resulted in achieving higher number of units sold and sales value achieved as compared to a year ago.

Astoria Ampang Phase 1 which comprises 506 units of serviced apartment will be handed over to home buyers next month. This project comprises 2 phases of 1,012 units with total GDV of RM840 million. Phase 1 has achieved a take-up rate (including bookings) of 391 units or 77% to-date.

The Group’s other on-going project is Damansara Seresta located in Bandar Sri Damansara, comprising two (2) block of 452 units of condominium with GDV of RM450 million. The take up rate (including bookings) for this project is 213 units or 47% to-date. This project is expected to be completed in 2022.

For the next calendar year, the Group plans to launch 2 new development projects namely Aria Rimba in U10 Shah Alam, and as yet unnamed project located at the former Sri Damansara Club in Bandar Sri Damansara.

Aria Rimba will be a 112-acres township development with estimated total GDV of RM1.2 billion. For next year, L&G is expected to launch Phase 1A (150 units of double storey terrace houses) and Rumah Selangorku Type A (162 units of medium rise apartments) with a total GDV of RM107 million.

The Sri Damansara Club project will be a 14-acres mix development located along Persiaran Perdana from the group’s head office in Bandar Sri Damansara with an estimated total GDV of RM2.0 billion. For next year, L&G plans to launch Phase 1 (732 units of high rise serviced apartments) and Phase 2 (602 units of affordable Type D units) with a combined GDV of RM570 million.

“For next year, we will launch Phase 1A of Aria Rimba project in Shah Alam comprising 150 units of double storey terraces and 162 units of medium rise Rumah Selangorku apartment. Sri Damansara Club project is a transit-oriented development (TOD) development project in Bandar Sri Damansara, whereby the MRT2 station is less than 400m away, and it will be connected by a sheltered link bridge from the station to the development. When these 2 projects are launched, the L&G Group would have a total of 5 development projects on offer to the public”, says Mr Low.

L&G remains in a healthy financial position with cash reserve of RM110 million as at 31 March 2020, and net gearing ratio of only 0.09 times of its shareholders’ funds. “Our focus for the rest of the year and next year will remain on sales. The Home Ownership Campaign 2020 together with the current low interest rate environment should help stimulate demand. With Phase 1 Astoria Ampang and Phase 1A Sena Parc now completed, and with the 2 attractive developments coming on-stream next year, we look forward to better sales and better financial performance next year” says Mr. Low.