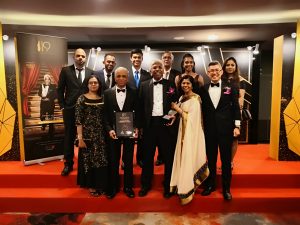 The announcement came following Galactic being honoured with the SME Internet Of Things (IOT) Award at the Platinum Business Awards 2019 by the SME Association of Malaysia on 10th of January 2020.

The CEO of Galactic Advance Engineering (M) Sdn Bhd, Mr Sakhtivel Narayanasamy is enthusiastic about the new markets and shared, “‘Industry 4WRD’ has helped Malaysian manufacturers adopt automation with the support of the government and we have completed 53 deployments of the GENiE with 2983 monitoring points in the last year since we launched it locally.

Now we are looking forward to expand our presence in the region with Indonesia, Vietnam and Philippines being more infant markets for automation and IOT while Singapore is more of a mature market for our expansion.

We are optimistic because the GENiE is a process based solution that can be adapted to work with legacy systems and in markets where majority of the manufacturers are SME sized, a plug and play solution is always appreciated. This feature will also allow for maximum return of investment (ROI) to these adopters within months of deployment,”.

“As we are celebrating our expansion, our efforts have also been recognised by the SME Association of Malaysia with the Platinum Business Award for the SME IoT Category. This is the first time the category has been introduced and we are excited to be the pioneer recipient, especially for developing the GENiE. It is testament to our commitment to drive Malaysian manufacturers especially SMEs to be globally competitive and forward with their operations.

More than 500 SMEs have been approved through the Industry4WRD Readiness Assessment and many of these manufacturer are already gearing up for IR 4.0 and IoT. Malaysia is going to remain one of our most vibrant markets with higher awareness and support that translates into increased adoption in the next two years,” added Mr Sakthivel.

As part of its expansion, Galactic has identified Indonesia as the market with high acceptance for automation for the region’s infant markets for automation. This is followed by Vietnam which is rapidly catching up followed by Philippines.

“It is going to be an exciting new decade for us with Malaysia’s increasing ease with automation and bringing the GENiE to our SEA neighbours in an aim to grow as a region together,” concluded Mr Sakthivel.