Herta is Winner of 2018 ALAS Awards 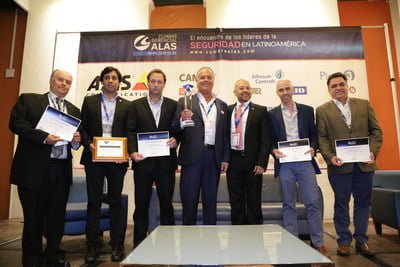 The jury, made up of six renowned industry professionals, evaluated and chose the projects that best contribute to the safety of people, property and properties in Latin America and the Caribbean. Herta was selected as the winner of “Best Latin American Security Project” with its “Videosurveillance System with Facial Recognition in Uruguayan football.”

Herta’s project is running since April 2017 with the aim to control violence in sporting venues. The Uruguayan Football Association held an international tender to select a facial identification system for the main Uruguayan football stadiums. The system had to perform an access control with a face recognition of all persons entering the stadiums, in addition to making a complete scan of the stands.

Field tests were carried out jointly with the ITC consultancy and the Ministry of the Interior of Uruguaywith dozens of solutions from various manufacturers. Finally, the solution selected for the implementation was the one offered by Herta. This solution, integrated by CDT Latam, includes Wavestore as VMS, Axis Cameras and Huawei Networking.

Herta’s US CTO, Alex Collado-Castells, carried out the system design with a high robustness, making it possible to detect and identify multiple faces simultaneously. “The environment was a challenge for us – the cameras located at the stadium entrances had to perform very well against background lighting and extremely bright scenarios due to the sun light,” explains Collado-Castells. “Our software was able to detect and identify 99% of the subjects in the database with none false positives. We are very proud of our performance and to be able to protect people and families at football matches.”

“This project is the precedent of many other football stadiums that we have already closed in this region and they undoubtedly are a reference for all Latin America,” says Fernando Dominguez, Sales Manager.

During the ALAS Management Summit, held on July 25 and 26 in Miami, Herta had also the opportunity to present its success story to the audience.