The Congress veining system that has been mapped by Casa’s geological team extends in a northwest-southeast direction. As a result of Casa’s recent staking activity, the Company now owns the entire known extent of the prospective area of gold mineralization. Previous operators of the Congress mine, including Echo Bay Mines, explored parts of the western extension of the vein system. and in 1989 when Echo Bay Mines offered the Congress Mine for sale, a “current ore reserve” of 400,000 to 500,000 tons at 0.3 opt Au was estimated (Sell and Miller, 1989). This resource, which was not measured in accordance with current NI 43-101 standards, was subsequently purchased by Malartic Hygrade U.S. Inc., an affiliate of Republic Goldfields Inc (“Goldfields”). Goldfields’ 1991 annual report lists production of 125,000 tons, yielding 28,500 ounces of gold. The mine was shut down at some point in 1992. The 1992 production figures are unknown.

The Company engaged Huit-Zollars, Inc. to perform the staking. The newly staked claims in the northern portion of the property cover the previously unexplored probable extensions of the Congress and Niagara veins that supported the historic mine. Casa’s exploration crews have identified target areas that if verified by on-going field and analytical work may comprise important new discoveries.

Mr. Farshad Shirvani, Casa president and CEO stated “We are extremely fortunate to have been able to acquire this 494.48 acre (25 claim) land package as it holds significant value for the Company’s overall Congress Mine exploration and development plans. The claims contain a historic “ore reserve” that the Company will endeavour to develop into a reportable NI43-101 resource.”

About Congress Gold Mine Project:

Since purchasing the Congress property, Casa has compiled all available technical data concerning the former mining operations. Documented mining operations, at intervals from 1880 to 1980 produced 426,000 ounces of gold, followed from 1982 to 1988 by poorly documented operations that may have produced an additional 75,000 ounces. 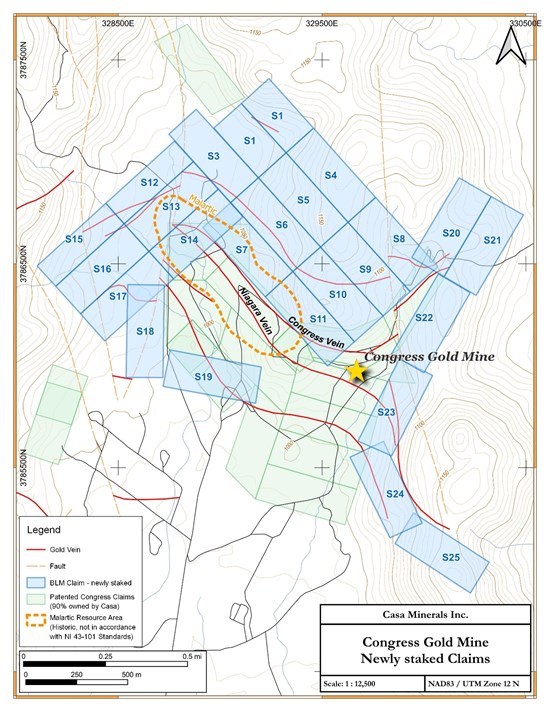 Qualified Person:
Mr. Erik Ostensoe P.Geo., a director and chief geologist of the Company, a Qualified Person as defined by National Instrument 43-101, has reviewed and approved the scientific and technical disclosure in this news release.

Cautionary Note: All historic data referenced in this news release were obtained from available archives and have not been confirmed or verified by the Company or a Qualified Person. There is no assurance that work by Casa Minerals will result in identification of economically-viable mineral bodies comparable in size and/or grade to those that supported historic mining operations.

On Behalf of Board of Directors
Farshad Shirvani, M.Sc. Geology
President and CEO

The Company is engaged in the acquisition, exploration and development of mineral properties located in Canada and the USA. Casa owns ninety percent (90%) interest in the Congress gold mine (Arizona, USA). This historic high-grade gold producing mine has not been explored nor been in production since 1992. Additionally, the Company owns a one hundred percent (100%) interest in the polymetallic Pitman and Keaper properties (BC, Canada) and has an option to acquire a seventy-five percent (75%) interest in the Arsenault VMS Property (BC, Canada).