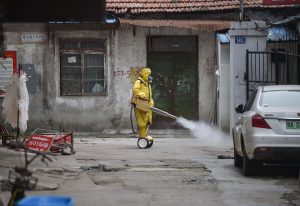 A medical staff member sprays disinfectant at a residential area in Wuhan in China’s central Hubei province on March 11, 2020. – China reported an increase in imported coronavirus cases on March 11, fuelling concerns that infections from overseas could undermine progress in halting the spread of the virus. (Photo by STR / AFP) / China OUT (Photo by STR/AFP via Getty Images)

The announcement that a committee jointly chaired by senior ministers in charge of security and economy clusters demonstrates that the government is serious about creating a balance between the safety of the population and the survival of the economy.

In the global context, as many countries struggle to deal with the medical response to Covid-19, this step represents a broader and indeed a rapid response to the crisis.

The goal of this committee is to balance medical risks and rewards of increased production during the Movement Control Order period. This response is testimony to Malaysia’s rank of 12th in World Bank Doing Business 2020 report. From the perspective of crisis management, all scenarios need to be taken into consideration.

This includes the scenario that a prolonged crisis becomes the new reality in which people and companies must be function. With this possible reality, innovation coupled with a radical departure from contemporary thinking is required. A solution could be the designation of “Strategic Production Zones” in locations around the country. These industrial zones are also green zones and confirmed to be Covid-19-free. They can have managed flows of human capital together with production flows.

A checklist of key components of what these zones would require include but are not limited to the following; close proximity to a port or airport, temporary onsite accommodation or centralised accommodation, medical screening facilities, additional onsite medical support and central kitchens to ensure availability of food.

In addition, apply the concept of Fly-In Fly-Out (or FIFO), which is used in the mining and energy sectors to allow workers to be on site for a period of time and then flown out while being replaced by other workers. This would allow the expansion of production beyond food join me in reaching out to them. DrJamilah sensed the urgency and gave a donation for their immediate needs. Datuk Jimmy Low, a philanthropist, arranged for me to collect 30 packs of food from the office of the district officer.

He had also been distributing food to residents in Simpang Renggam, parts of which are under the Enhanced Movement Control Order (EMCO). Within 24 hours, the food, which included rice, flour, sugar and eggs was distributed to Rohingya families here.

Their parents had been jobless during this time and had no source of income for their necessities. They also had no savings, and worse, no food. When I met their skinny children, I noticed that they were malnourished. Even though politicians and other NGO’s have been distributing food to groups here, the Rohingya have been overlooked.

As a social worker, it is a joy and a privilege for me to bring relief, Staff at the district officer’s office helping to load the donated foodstuff and medical supplies. Can the concept of “Strategic Production Zones” be applied to the current situation considering the country’s capabilities? The police and armed forces have cordoned off “red zones” and different agencies have ensured that those in the affected areas receive food and medical attention. At the same time, several risks have become accepted norms. They include the movement of cargo overland and air, reduced and registered workforce in critical industries, operation of the banking sector and the controlled movement of the population to buy food.

These factors leave space for the discussion between stakeholders for expanded production during this time. While many SME’s have their heads on the cutting block, some of the larger corporations will not be far behind if supply chains and related ecosystems grind to a halt. Supply chains are complex and this crisis has been a strict task master in the lessons of interrelatedness of local and international supply chains. While we attempt to flatten the Covid-19 infection curve, we can’t ignore the fact that the steep learning curve has not changed.

Corporations that are chomping at the bit to return to partial or full production need to remember that on any level, a sustainable business model requires customers to remain alive to buy goods and services well into the future. On the flipside of that same coin, it’s important to remember that public health is a luxury that is made possible only by a functioning economy. Innovation and resilience from all stakeholders will be required to shape a positive and sustainable future. If workers and corporations are concerned about their shared financial realities, they will have to continue to adapt to the changing conditions during times of crisis to ensure production.