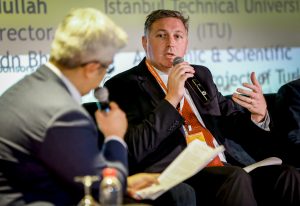 To drone or not to drone, is no longer a question.  The COVID19 pandemic has brought into sharp focus the need to remove human touch from the delivery of many goods and services.  How will we humanise this experience in the coming years and strike a balance between the buzz of drones and the friendly smile of a delivery person?  According to the latest data from the United Nations Department of Economic and Social Affairs, 55% of the world’s population live in urban areas, this is expected to increase to 68% by 2050.  It’s clear that cities will need to be smarter and drones will play an increasingly leading role.

A city can only be as smart as the people who live there, which means we are looking at an education problem, putting that aside, cities vying to be considered “smart” need to be the first ecosystems to adopt a wholistic approach to drone based solutions. Especially if drones are going to play a role in the way we live sustainably.

The recent Global Drone Conference, hosted in Malaysia before the MCO, was an excellent opportunity for stakeholders to share ideas with regards to the role of drones in the smart cities of the future.

Designing a sustainable future with drones, requires a framework.  This starts with a clear vision, that leads to an implementable strategy with coherent policies that give birth to a regulatory environment that allows business and individuals to successfully operate.  At this DNA level, it’s clear that the Ministry of Transport has the ability to take the lead and put things in order.

This leadership role can be extended to engagement with Malaysia’s ASEAN neighbours to unify standards.  This includes, but not limited to the development aviation regulations that are globally benchmarked to ensure safe drone usage in cities and strategically important areas like airports and industrial zones.

A successful ecosystem takes time to rollout as it involves all stakeholders.  Much of the framework will be determined by the government, yet ecosystems are organic and need the involvement of entrepreneurs, techies and venture capitalists to name a few.  Like a drone swam, SME’s can quickly take advantage of a rapidly changing world.

Now is the perfect juncture for SME’s to empower the next wave of economic growth, which will be much needed in the “Post COVID19” reality.  Imagine the levels of productivity that 5.7 million SME based employees will achieve and the resulting impact on revenues for SME’s that represent 98.5% of all business in the country, if they were multiplied by the use of drones in the context of smart cities.

SME’s can lead by taking the bold step beyond Industry 4.0 into Society 5.0, a concept first proposed in the 5th Science and Technology Basic Plan as the future society that Japan should aspire to become.  “A human-centred society that balances economic advancement with the resolution of social problems by a system that highly integrates cyberspace and physical space.”

The last few weeks the public have caught a glimpse of how drones can be quickly adapted to solve problems.  Utilizing drones to monitor areas, make public announcements and even conducting sanitation trails.  Not to mention, some amazing footage of empty urbanscapes with brilliant blue skies, in a role that we have come to be familiar with, an airborne camera platform.  The simple objective is to free up the authorities to conduct other more critical tasks.

However, the data gap still exists and local drone players have yet to conduct detailed efficiency studies to argue their case.  The question remains can Malaysia attract investment into this sector to fuel this vision.  Beyond the novity of pizza delivery by drone, the COVID-19 crisis has perhaps fast tracked the desire to get this done sooner as opposed to later.