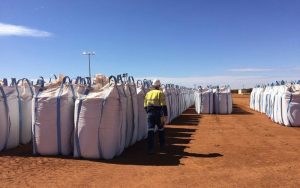 Lynas Corporation Limited (ASX:LYC, OTC:LYSDY) (“Lynas”) is pleased to announce Kalgoorlie, Western Australia, has been selected as the location for its new cracking and leaching plant, creating new jobs and a first step in establishing a critical minerals hub in the Goldfields region.

Kalgoorlie was selected from the two shortlisted locations in the Goldfields region following extensive due diligence. Kalgoorlie provides close proximity to the Lynas mine at Mt Weld as well as a skilled workforce and a rich history in the mining and processing industries.

Lynas’ Kalgoorlie cracking and leaching plant will upgrade the Lynas Mt Weld rare earth concentrate that is currently exported to the Lynas rare earth processing facility in Malaysia. It is a further step towards delivering on the Australian Government’s Critical Minerals Strategy and the objective of the Western Australian Government for more downstream processing. Lynas will also explore opportunities for the next stage processing (upstream solvent extraction) in Western Australia.

In establishing these facilities, Lynas will also facilitate investment in infrastructure and supply chain capabilities which can form the basis of further industry development in the region. Lynas looks forward to continuing to develop its relationship with Curtin University and the WA School of Mines working to create IP in the processing of critical minerals in Australia.

“We thank the City of Kalgoorlie-Boulder for their warm welcome and we look forward to sharing further details with the local communities as our plans progress. Lynas was built from the ground up as an environmentally responsible Rare Earths producer and we will take the same approach to our facility in Kalgoorlie.

“The signing of this option is an important step for our project and we look forward to updating the market on its progress.”

“The City is thrilled to welcome Lynas to Kalgoorlie-Boulder, and we are looking forward to working with them to see their new cracking and leaching facility through to completion and production. This is a fantastic step forward in the work we have been doing to diversify our local economy and expand the number of skilled residential jobs available in our City.”

“There are so many exciting opportunities that this partnership brings about, and we look forward to working with all of the key stakeholders, including the State and Federal Governments to further support downstream processing here in Kalgoorlie-Boulder.”

“The City would also like to thank Neometals for their support in varying their option to sublease to allow both Lynas and Neometals to be accommodated within our strategic industrial areas.”