The Malaysia Global Business Forum (MGBF) announced that it has appointed Datuk Yong Soo Heong as its Chairman who retired as Chief Executive of BERNAMA upon reaching the mandatory retirement age of 60 for government employees in October 2014. 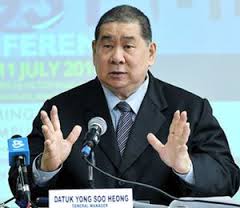 He has been in journalism for the past 40 years, starting as a journalist with the Straits Echo in Penang and later joined BERNAMA where he made his mark in his career. Yong was BERNAMA’s Editor-in-Chief from 2007 to 2012, making him the first BERNAMA business journalist to rise to that position before being elevated to Chief Executive in 2013.

Commenting on his new role, Yong said: “This will be an extension of my career as gives me time to also interact with people who make things happen.  As Malaysia aspires towards developed nation status, I find that we have to learn more from people who have been at the top of their game. This is where I come in, bringing people who matter to share their insights and experiences with Malaysians through our forums.”

While the MGBF will continue to act as a platform for “Strategic Business Development” and a place to “Meet the Right People” with the appointment of Datuk Yong as Chairman will ensure that the forum has a greater impact and contributes more to the economic development of the nation.

Since the inaugural forum which was held in 2009 the MGBF have organised several industry and country specific forums including dedicated business matching programs.  The MGBF have also participated and lead several overseas trade and investment trips for Malaysian companies expanding their market share in the region and around the globe.