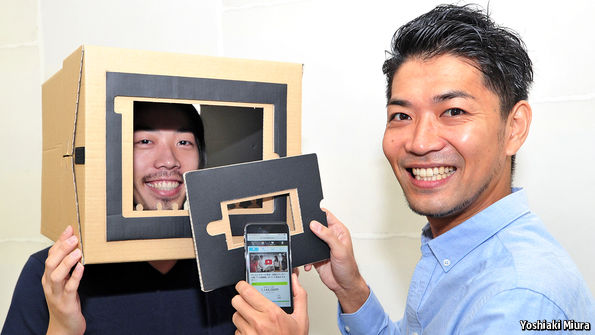 Now all we need is a tiny popcorn-seller

IT STARTED in a cosy izakaya, or pub, in Fujieda, in Shizuoka prefecture, when a gathering of furniture-makers dreamed of marking out some space for themselves in their cramped family homes. The result was an otoko no kakureya, or “hiding place for men”, a tiny, cockpit-like wooden room with a desk, shelves and reclining chair. Sales are taking off.

Another popular Japanese product offering the illusion of personal space is the Solo Theatre (pictured), a cardboard box that users put over their heads, which has a slot for Apple’s iPhone. Inside there is a black cut-out of a row of heads, as if the user is at a cinema.

The product’s surrealism has tickled thousands of Japanese social-media users. It is a selfish product that appeals to the need to get into a small womblike space of one’s own and watch films and other content, explains Satoshi Aoyagi, of Lucy Alter Design, who fashioned it with a colleague.

Another factor is shrinking living-space. The average Japanese apartment has dwindled from 70 to 60 square metres over the past decade, so that people are even more on top of each other. Cultural forces are powerful too, notes Masahiro Abe, a sociologist at Konan University. Japanese must don a public mask for their hierarchy-bound, open-plan offices, and a second face for their families. Turning to small, private boxes at home is their way of searching for a “third space”, he says.

Hayato Kasai, a subculture expert at Bibi Lab, a design firm, went so far as to bring a tent to the office as a way of tucking himself away and avoiding interaction with colleagues. His company quickly spotted a new product in it, and designed an indoor “Bocchi Tent”. Bocchi is a sarcastic word for “alone”, but now it is becoming a brand.

There is also a new “Danbocchi” soundproofed cardboard box for karaoke from Bandai Namco Entertainment, a video-game company, so that singers no longer have to record under blankets at home. Bibi Lab’s tent for loners now far outsells the firm’s regular ones for camping outdoors.

Despite the success of such products at home, it remains unclear if there is much demand outside Japan from people hankering for privacy. They are also examples of the introversion of Japanese product designers, who nowadays tend to think more of the home market, and struggle to create world-beating ideas like the Sony Walkman. They are also often unwilling to compromise. One enthusiastic customer asked the makers of the Solo Theatre to produce a double-sized cardboard box so that he could watch films in it with another person. The answer was a firm “no”.