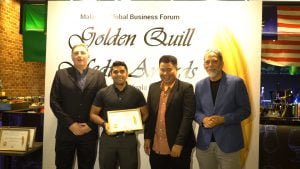 The Malaysia Global Business Forum hosted the MGBF Golden Quill Media Awards in Kuala Lumpur on the 2nd of May, 2019, on the eve of the World Press Freedom Day which was first proclaimed by the UN General Assembly in December 1993, following the recommendation of UNESCO’s General Conference.

“World Press Freedom Day is an opportunity to celebrate the fundamental principles of press freedom, assess the state of press freedom throughout the world, defend the media from attacks on their independence and importantly pay tribute to journalists who have lost their lives in the line of duty.  The Malaysian media have taken impressive steps to improve to capacity of the media industry in the last year, we want to recognise those at the cutting edge of this development.” stated Nordin Abdullah who is the Founding Chairman of the Malaysia Global Business Forum. 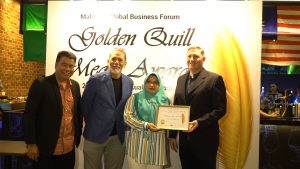 Nordin Abdullah who is also an EXCO member of the Malaysia Australia Business Council.  “The Journalist Welfare Fund is an important initiative by the National Press Club, we are please to make our contribution and call on others in the corporate sector to consider doing the same.” National Press Club President, Dato’ Ahirudin Attan @ Rocky Bru received a contribution on behalf of the fund.  The Malaysia Global Business Forum also made addition CSR contributions to the Malaysia Cricket Association and the Selangor MAC Futsal teams.

The categories that were recognised this year were as follows:

The MGBF Golden Quill Media Awards are hosted by the Malaysia Global Business Forum the event is also supported by the Crisis Management Centre and media consulting firm Bendahara Solutions.

The Malaysia Global Business Forum was established to assist stakeholders at the intersection of international business and Malaysian business through advisory, advocacy, research, networking and business matching. The awards night will recognise the important role that the media plays in that dynamic.